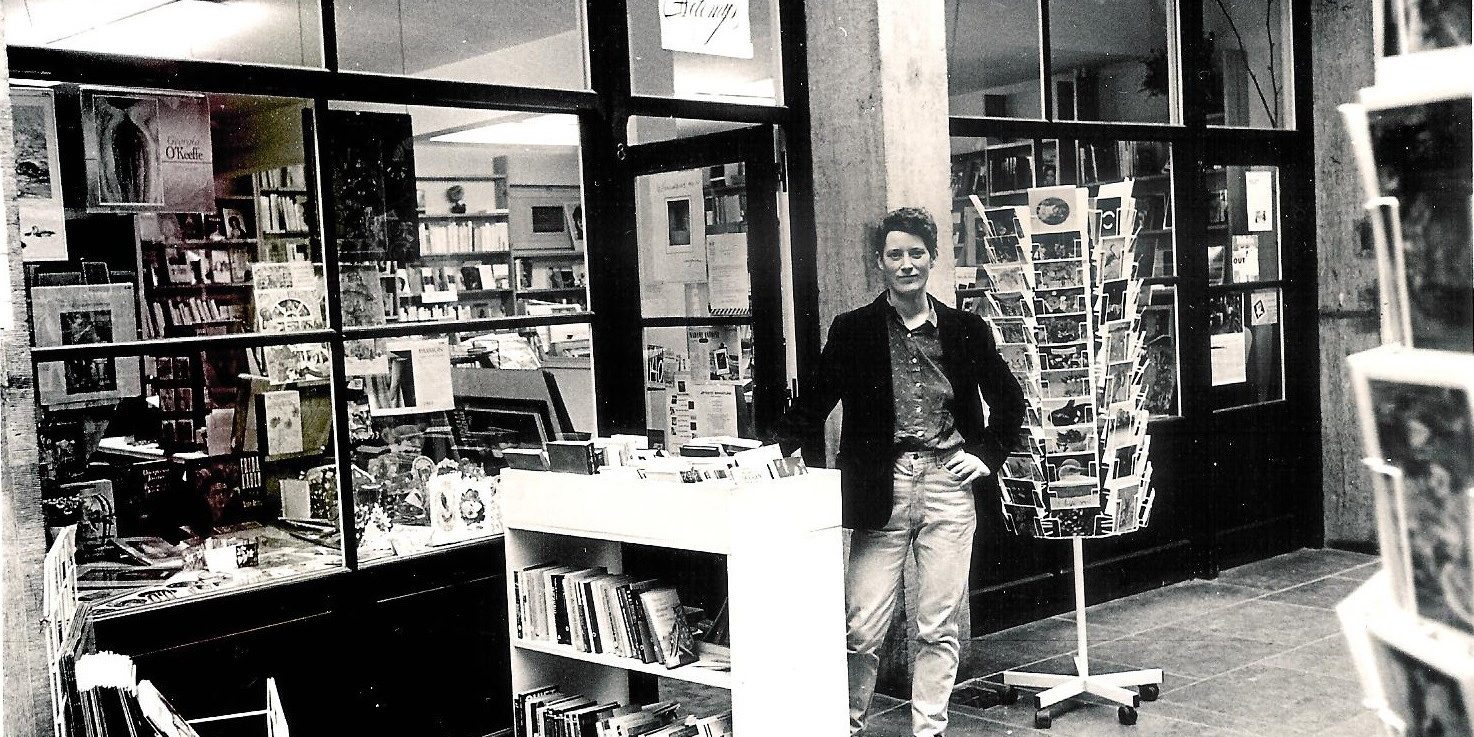 One woman’s fight against homosexual prejudice in Brussels

One woman’s fight against homosexual prejudice in Brussels

Marian Lens in front of her bookshop Artemys in Galerie Bortier in Brussels. Credit: Marian Lens

Marian Lens is waving her rainbow umbrella in the air. The Grand Place is already packed with tourists in early May, and she is leading a dozen of them on her tour like no other. In the narrow streets charged with centuries of Brussels history, she shares pieces of her own memories of the city, as well as historical facts on one of Belgium’s long ignored communities: LGBT people. “It is our history”, Lens told The Brussels Times. “If we don’t research it, no one else will.”

Lens has been one of the city’s most prominent and vocal figure of lesbianism and feminism since the 1980s, when she opened the Artemys, Brussels’ first and biggest lesbian feminist bookshop. It has since closed, but Marian Lens’ work hasn’t stopped: she helped found the Rainbow House, a hub for LGBT associations, which flies the rainbow flag high in the rue du Marché au Charbon. It’s also the starting point of her LGBT tours of Brussels, which she has designed and ran with her company L-Tours since 2013.

Following Lens in the paved alleys of the city centre, tourists are invited to “go backwards in time” to see Brussels through the eyes of its LGBT communities. There is the police commissariat on rue du Marché au Charbon, a massive red brick building which used to be a prison, where the French writer Paul Verlaine was detained after his famous spat with gay lover Arthur Rimbaud, during their Belgian trip.

There is the fancy Royal Gallery, where transvestites would perform at the Théâtre du Vaudeville in front of bourgeois audiences of the 19th century, and where the recent movie The Danish Girl (2015), the story of one of the first sex reassignment surgery recipient, was filmed. There is the City Hall balcony, where the city’s first same-sex couples were married after the law passed in 2003.

There is the world-famous Manneken Pis statue ‒ did you know his first-ever clothing was a condom, put on by Act’Up as part of a campaign? The “little pissing guy”, Lens explained, was sculpted by Jérôme Duquesnoy, whose homosexual son was the country’s last person to be convicted of sodomy, in a sombre rape trial.

Through her anecdotes, Lens paints a different Brussels, where homosexuals lived on the sidelines but existed nonetheless. She brings figures of LGBT rights back to life, from the gay writer George Eekhoud, who wrote novels in which same-sex couples knew happy endings; to Suzan Daniel, who in 1953 founded the first LGBT association in Belgium; to Gabrielle Petit, who passed as a man to spy on the Germans during World War I.

But the liveliest memories, of this rainbow-coloured Brussels, are the ones Lens invokes from her own experiences. “This used to be a lesbian bar… Imagine dark streets, with broken windows,” she tells the crowd as they pass by the Délirium Café, now a well-lit area of the touristic upper-centre. The Black Swan, the lesbian bar she describes, was one of the very few places to go out as a homosexual youth in the 1970s ‒ with walls painted all in black, a jokey reminder that its clients were “the black sheep of the family”.

“You had to know which bell to ring, because there was no sign at all,” Lens recalled. Things have changed fast. Crossing rainbow pedestrian paths installed for the Pride weekend, Lens points to frescoes depicting gay and lesbian cartoons: “As a teenager,” she said, “I never thought I would see this in my life.”

Marianne Lens ‒ she prefers to spell it ‘Marian’, because it blurs the edges of gender ‒ arrived in the city in the late 1970s, as a student at the Université Libre de Bruxelles. In the smaller town of Waterloo, where her family was from, being a lesbian was “not accepted”, but the capital offered new possibilities. During her research for her master’s thesis, an analysis of the intersection between female and heterosexual oppression, she met with feminist and lesbian activist groups. What was an afternoon of research at first, became her lifetime fight. To be a lesbian, and to proclaim her identity to the world, became central in her work. “In Belgium at the time, there were only about 15 of us who were out of the closet,” she recalled.

After graduation in 1981, she let go of her hopes to find academic work, disheartened by insinuations that she would never find a university job while openly homosexual. Instead, she decided to launch her business, on her own radical, lesbian, feminist terms: “I started a bookshop for lesbians and women, with no money. To sell books was to sell ideas.” Artemys, the very first lesbian bookshop in Brussels, opened on the chaussée d’Ixelles in 1985.

Two years later, Artemys moved from Ixelles to Galerie Bortier, near the Central Station. There, the store had an elegant sign ‒ and a bay window, which to Lens was an important step forward: “I wanted them to see us,” she said with a malicious smile, meaning the heterosexual majority, still very prevalent at the time. She had chosen the name Artemys because of the Greek goddess of nature, a protectress of women and abandoned people who has relationships with nymphs. “She is the only lesbian goddess,” Lens said.

The shop, which offered more than 10,000 titles on feminism, lesbianism, history of women in French, Dutch, English and a few other European languages, doubled as a carterie d’art, with more than 60,000 artworks on display. Of course, much of the paintings and photography either depicted women or was made by female and lesbian artists, among them Romaine Brooks, Tamara De Lempicka and Frida Kahlo. “People would buy the cards without necessarily knowing the art was made by lesbians,” Lens explained with a smile.

Not only was the card format a democratic (and inexpensive) way to share art; it also gave visibility, even so subtle, to lesbians, “pariahs among the pariahs”. Unlike the books, which sold moderately, Lens said the cards became a successful business and introduced her to trendy circles of the capital. But below the surface, the shop did far more than selling books and cards: it held film screenings, signing events and political discussions, and became a haven for lesbian activism. Underground lesbian magazines would blossom on the shelves, flown in from France, the UK, Germany, even Québec… She retains worn out copies to show tourists during tours, as if to give tangible proof: “It existed! Not officially, but we have them.”

Lens welcomed and nurtured newcomers to the LGBT community, often offering psychological or legal support, providing contacts and pointing clients towards open-minded doctors ‒ protecting, like the Greek goddess whose name she borrowed, women and abandoned youths. “People knew it wasn’t a bookshop like any other,” she said. Some young ones, still closeted, would hesitate to take the plunge and open the door ‒ she remembers them looking through the window. “I meet people these days who tell me they never dared to enter the shop, but that knowing it was there helped them nonetheless.”

She worked closely with the owner of Darakan, a gay bookshop on rue du Midi: “He would provide support for the guys, I would do it for the women.” Brussels’ lesbian circles were very small then, especially for those who were openly out: “We all knew each other.” Her address book was hidden as well as a treasure in her home because it contained dangerous secrets: the names of many members of the LGBT community who were still closeted.

In the 1990s, Lens’ bookshop gradually became known beyond LGBT circles and the bookseller was featured in the pages of several magazines and newspapers, from De Morgen to De Standaard. But Amazon and other multinationals started to creep into the market, leading Artemys to close in 2002. “Publishers were disappearing one by one. No one believed in the shop anymore,” Lens said. “I was really depressed and it was very hard for me, so I put all my determination in creating the Rainbow House.”

Looking back, Lens can appreciate the immense change that has happened since she first opened her bookshop to help others like herself. But the fight is far from over: the “backlash”, as she calls it, has always loomed near. In the time of Artemys, there would be insults tagged on the door, threats and obscene messages left in the letter box; book orders would arrive late on purpose and the shop’s internet access was even hacked once and computer discs wiped out.

Lens talks about anti-LGBT abuse like she would about bad weather: something she would rather not experience but cannot control. “I have been attacked and harassed so many times because I am openly lesbian,” she said. Four years ago, anti-lesbian slurs were written on the house she shares with her partner. She went to the police ‒ an option she didn’t have when she was younger, she notes, because officers would mock homosexuals, too ‒ and decided to mention the incident to all her neighbours at a street party, as an interesting rather than distressful event. “Maybe I talked to the aggressor, who knows,” she said in a shrug. “I didn’t shy away. I refuse to go back in the closet.”

Such aggressions still happen in Belgium regularly, she reminds every group on her tours before letting them go. When she looks to other countries, like Russia, Lens sees the homophobia she encountered in her youth, one that knows few legal boundaries. After the Belgian law for equal marriage was passed in 2003, many thought that the world had changed, she said. “But the world doesn’t change in 20 or 30 years. We have to keep fighting, to be careful, to preserve what’s been won. It’s a story of ups and downs.”